How To Treat Sinusitis

May 28th, 2016 | Posted by Jean Alfonso in Uncategorized
Fact Checked

When the sinuses become infected or inflamed, this is often termed sinusitis. The sinuses are located within the cheeks, forehead, and around the eyes. These are linked together, then run through the nose and throat, via the Ostia. The function of the sinuses is to moisten the inhaled air before it hits the lungs, while also ensuring that dirt and other types of pollutants do not get breathed in through trapping these in the mucus. 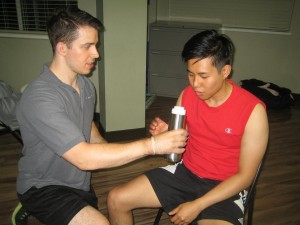 When the sinuses become infected or inflamed, this is often termed sinusitis. The sinuses are located in the cheeks, forehead, and around the eyes.

The main reason why sinusitis happens is that there is too much mucus in the sinuses, which then causes the channels to become more narrow. The reasons for mucus increasing can be due to allergies, colds, getting an irritation in the sinuses such as chlorine, and there can be bacteria present. When bacteria are present, often the person has pain and fever. When the sinuses are infected, the person will find that their mucus is yellow or green.

The symptoms often associated with sinusitis include:

There are certain people who are going to be more prone to have sinusitis, and these include:

Treating sinusitis is often thought to use decongestants or nasal sprays, but this can actually make the symptoms worse and cause more swelling in the face. Instead, a person should:

For those who have severe or persistent issues, then the removal of mucus via surgery is an option. For those who do have this, it is important to see if there is anything that you can do in order to limit this happening such as checking for allergies, dental issues or the like that could be causing this.

If your symptoms are minor and you are feeling healthier, you don’t generally have to see your doctor and can treat yourself at home.

Speak to your doctor if:

Your doctor will generally be able to detect sinusitis based on your symptoms and by observing your nose.