Not all spiders affect the human health; however, there are some such as the black widow spider and the brown recluse that are medically significant spiders because their bites are detrimental to humans. Spider bites are often not detected until the signs and symptoms begin to appear.

However, symptoms may be caused by other factors such as chemicals, infections or allergies that are mistaken to be spider bites. If you suspect that you have been bitten by a spider, look for one in your household and try to identify it through markings, color etc., so that you can tell your doctor about what caused the symptoms.

The black widow spider and the brown recluse prefer dark and warm climates where there are ample flies to hunt on. You will find them in dry, dirty, peaceful areas where there is no human interruption, such as closets, under sinks and wood piles.

Almost every spider is venomous; however, severe effects are very rare because the venom is either weak or discharged in small amounts. Symptoms of a spider bite are similar to insect bites: 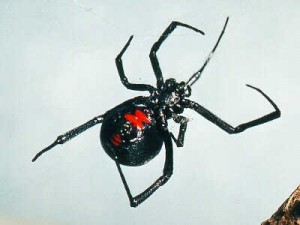 A Black Widow, pictured above, can produce a bite that can be fatal to humans.

A black widow spider is identified with a red marking, shaped like an hour glass on its abdomen. Black widow spider bites often lead to severe cases but are only occasionally deadly. The bite will feel like a mere pinprick and you will not be able to feel the bite. The bite will only be identified once the signs and symptoms such as light red marks and swelling appear. After a few hours, you will experience the following symptoms:

The spider may have a violin shaped marking on its back which is sometimes inconsistent. Effects of a bite will start with a mild stinging sensation after which, redness and severe pain will occur. The remaining symptoms are as follows:

In case of a black widow spider or brown recluse bite, follow these steps:

Doctors suggest getting tetanus shots every 10 years to make you less susceptible to infections. If you have received a tetanus shot within the last 5 years, get a booster shot in case, you have been bitten by a spider or any other insect that may lead to serious infection.

To learn more about poisonings and other types of bites, including spider bites, enrol into St Mark James training programs. We are partnered with the leading providers in the Country. Training partners are located in Calgary, Edmonton, Winnipeg, Vancouver, Toronto, Ottawa, Halifax, and many more.

You can follow any responses to this entry through the RSS 2.0 You can leave a response, or trackback.